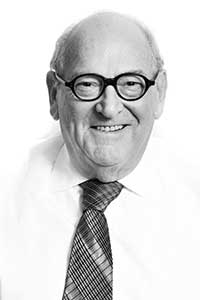 is a lawyer and a lawyer’s son. He was born in Plymouth, to which town his family, leaving the line of Napoleon’s retreat from Moscow, had come in 1813 in time to see the French Emperor a prisoner on The Bellerophon in the Sound, all of which explains his occasional references on cold days to frozen Frenchmen.

Plymouth provided formative influences: Drake; connections with the Military (he served in the Plymouth College Combined Cadet Force); the guns of the Royal Citadel, which point over the town and not out to sea to subdue the pro-Parliament citizens.

From all this, he obtained a dislike for foreign dictators, a distrust of overbearing executive bureaucracies, the knowledge that you can finish the game and beat the revenue too and a valuable aphorism which he never seeks to use as a weapon but bears in mind whenever anyone speaks to him in jargon.

He has two children who no longer have homework for him to help with; but, when they did, he found that his ability to factorise quadratic equations was just the same as it was when he, himself, had homework.

As a lawyer, his primary interests are planning transactions in the most efficient manner, helping in what Mrs. Thatcher once described in a letter to him as “the battle against the Inland Revenue”, the control of executive action and litigation, both on technical tax issues and at the interface of revenue and administrative law.

Outside the law, he has too many interests to mention: he once took strenuous exercise but gave it up after meeting a doctor who told him that we are all born with a definite but limited number of heartbeats, none of which should be wasted in the gym; and he now models himself more on Mycroft than on Sherlock Holmes.

His published works include books and articles on legal topics and, when he feels strongly enough, letters to the newspapers.

A copy of his Privacy Notice can be found here.