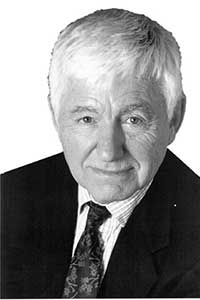 was born and brought up in St. Helens, Lancashire (now Merseyside). At Sedbergh School; he learned to play Rugby football and the piano – and acquired some well-pronounced French, German and Italian (not all of which he remembers); he emerged from military service in the Middle East with presentable basic modern Hebrew and quite unpresentable soldier’s Arabic; he studied at Cambridge under F.R. Leavis; he taught in the preparatory department of RADA while he passed his Bar exams; he was called in 1954; he first practised in the chambers of Sir John Foster QC, and in 1965 he founded these chambers, in a new building in Gray’s Inn..

He has always maintained a foothold in the world of the arts. He is author of Venice: an Anthology Guide and co-author of Mediterranean Vernacular, and he is chairman of the Warwick Arts Trust.and of the Friends of Young Artists’ Platform

He has written books on tax – most recently (with John Brooks and Joseph Field) Asset Protection Trusts (Key Haven Publications, 2018). His principal interest, and his practice, lie in the tax aspects of cross-border transactions and the planning opportunities they offer. He does not appear in court, but he does chair (and very occasionally speaks at) conferences of Itpa – the International Tax Planning Association, of whose committee he is Chairman.

A copy of his Privacy Notice can be found here