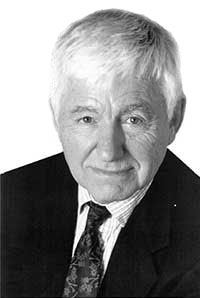 Last Friday night, 25th November 2022, Milton Grundy, after a short illness, died peacefully in his sleep. He was 96 years old, but he still had the intellectual vigour and curiosity of an 18 year old and his mind was not dimmed by age or circumstance.

Milton was born in 1926 in St Helens Lancashire, the son of a manufacturer. He was educated at Sedbergh and then at Cambridge University where he read English under FR Leavis, from whom he learnt the necessity of reading and understanding the text, a lesson he instilled into all those with whom he worked and a skill he brought to the reading of tax statutes.

After National Service in the army, he came to the bar, initially in the chambers of Sir John Foster and then, in 1964, he set up, with Francis Brennan and Harvey McGregor (both of whom, though younger than he, predeceased him) Grays Inn Tax Chambers in the then newly constructed building called Grays Inn Chambers. Most barristers’ chambers then were cramped and dark but, by the standards of the time, Milton’s chambers were airy, spacious and light, qualities which represented Milton’s character in every way, qualities which were present in the innovative ways in which, particularly in relation to international matters, he advised, qualities which gave him a world wide reputation.

Milton was a wonderful lawyer, with a deep understanding of the principles underlying the rules and a curiosity which led him to ask and to discover why the law was as it was.

Each time a Finance Bill was published, Milton, in an astonishing feat of concentration and effort would read it and look for ways around it, fizzing with new ideas, the sharpness and clarity of his mind always on display.

Apart from law, he was a sponsor of the arts, an author of books and a sparkling companion. The world is emptier without him. He will be missed by many, including his colleagues at Grays Inn Tax Chambers and his partner Omar Afridi, to whom we send our condolences at this sad time.