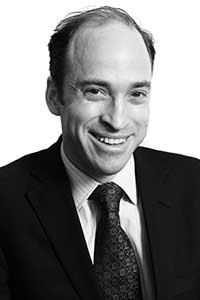 grew up in London in a family of lawyers, as a result of which he learnt to argue from an early age. A King’s Scholar at Eton, he went on to read Physics at Oxford. He is sometimes asked how it was possible to make the transition from Physics to Revenue Law, to which he usually replies that if you can handle quantum mechanics then you can certainly deal with anything the Revenue can throw at you

His professional interests are wide although recently he has tended to concentrate on corporate tax and VAT; he also has a substantial practice in pension schemes and employee taxation.  Nothing pleases him more than to draft a “killer” letter to bring a dispute to an early close but if that fails he is always ready to substantiate written arguments in an appearance before the First-Tier Tribunal or the higher courts. He usually appears for taxpayers rather than the revenue authorities.

He has co-authored several books, including the 7th edition of Milton Grundy’s Offshore Business Centres, also The Laws of the Internet (with Clive Gringras) and the tax section of Partnership (Butterworths, 1st edition). For several years he has claimed that a new VAT book is in the pipeline, but this seems to be based more on the theory that everyone has a book in them than any actual writing having been done.

He was an early adoptor of the Internet, and created Chambers’ first website. He continues to be a keen advocate of technology generally.