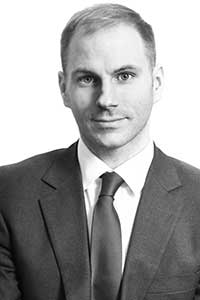 Michael Jones QC is a highly respected new silk experienced in a broad range of tax issues, who has a focus on corporate and commercial matters, including shareholder taxation and employment tax issues. He is regularly instructed in high-value litigation both for the taxpayer and for HMRC. “Very affable, intelligent and collegiate.” “He is incredibly thorough and has a high knowledge and command of all corners of the tax system.”

Michael Jones QC receives strong praise from peers for his handling of indirect tax matters. He represents both the Revenue and the taxpayer in noteworthy cases involving VAT and stamp duty.

“Very sound and technically very accomplished.” “He has a very pleasant demeanour and knows his stuff inside out.”

Michael was called to the Bar in 2006, having obtained a distinction on the BCL at Oxford University and a first-class law degree at the University of Nottingham. He won a number of academic prizes, including for tax law, and was awarded Hardwicke, Denning and Megarry Scholarships by Lincoln’s Inn. At Bar School he came top of his year, winning the Taylor and Buchanan Prizes.

Michael has appeared in a number of the most high-value and interesting tax cases in recent years, including several in the Supreme Court and the CJEU, acting both for taxpayers and for HM Revenue and Customs. Before taking silk, he was a member of the Attorney General’s A Panel of junior counsel, appointed to conduct the most complex government cases in all kinds of courts and tribunals.

Michael’s extensive litigation and disputes experience covers all kinds of tax and tax-related matters, from tribunal appeals and judicial review to civil claims and arbitration, and he has appeared at all levels from the Supreme Court to the County Court.

A significant part of his practice involves advising and acting in relation to commercial disputes and restitutionary claims that have a tax angle and he has been involved in a number of the leading cases in this area.

He covers the full spectrum of UK tax law, but with a particular focus on all aspects of corporate and commercial tax and VAT work, including:

In addition to advising on UK taxes, Michael has experience of advising on the tax laws of other jurisdictions, in particular Hong Kong, Singapore, the Turks and Caicos Islands and Bermuda.